Gorilla
Mountain gorillas (Gorilla beringei beringei) live in stable groups headed by a dominant silverback. The greatest threat to these gorillas is deforestation and pressure from the increasing population of Rwanda, Uganda and the Congo (DRC). Their proximity to humans also increases the risk of transmitting diseases. 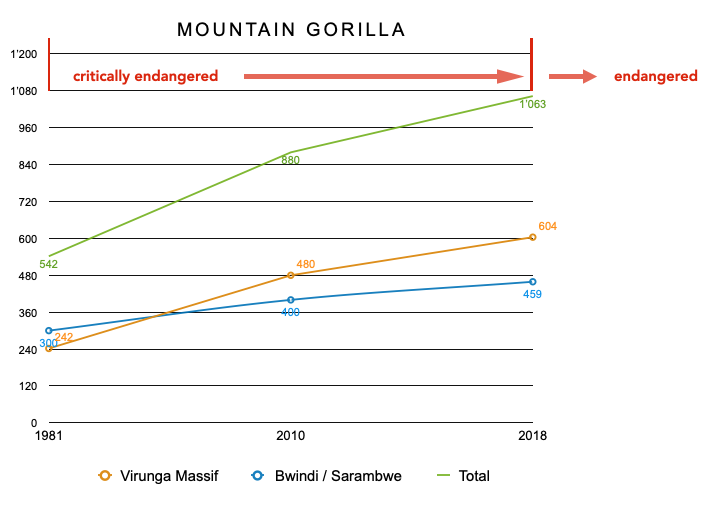 The mountain gorilla population has recovered from a historical low in 1981. This recovery is particularly evident in those groups that are strictly guarded by rangers and visited by tourists. Although there exists the danger of diseases being transferred from human to animal, photographic tourism is largely beneficial, generating a great deal of income for the protection of these animals. The conservation status of the Mountain Gorillas was changed from critically endangered to endangered in 2018.

The region around Lake Kivu is chronically volatile. The Congo (DRC) in particular is favoured by rebels and bandits who destabilise the entire area. A further threat exists in the form of multinational oil companies, which are still eager to exploit the last remaining habitats of the mountain gorilla. The rangers of Virunga National Park are true heroes and have earned our support.

These projects help to protect gorillas
Virunga Ranger, DRC >
What we achieved >