Choose your language
Deutsch
English
Rhino Protection, Namibia
The desert-adapted black rhino, is a critically endangered species. The population has recovered slightly from the rapid decline of the 80s, but poaching in South Africa has spiralled out of control again in recent years, leading in turn to an increase in threat status for the rhino in Namibia.

However, in recent years poaching in South Africa has got out of control and the threat to rhinos in Namibia has increased as well. The rhino is already extremely vulnerable to the difficult desert conditions it lives in, so the dozens of poaching incidents per year are fast becoming a threat to its survival.

It is suspected that the primary market for rhino products can be found in Vietnam and China, where huge sums of money exchange hands for just 1 kg of horn, which is seen there as a cure for cancer and other illnesses. Rhino horn, however, is made entirely of keratin – the same material as human nails – which means patients chewing on their own fingernails has exactly the same effect as consuming rhino horn.

Poachers shoot or sedate the rhino before removing its horn so close to its head that it ends up bleeding to death. Countermeasures include increasing patrols in protected areas, colouring horns, implanting tracking devices, poisoning horns and preventatively removing horns.

These extreme measures can be avoided if the local population helps to protect the rhinos. This is why the Rhino Ranger Initiative was created, which does just that. The local people are paid to monitor the rhinos and report unusual activities and the appearance of strangers to the police and rangers, who can then take immediate action.

With a visit to the Desert Rhino Camps you support the work of the Save the Rhino Trust and also have the opportunity to track down, with the help of trackers, one of these rare and extremely shy black rhinos.
Support this project
Rhino Protection, Namibia
Donate now!
Our goal is to continuously finance these projects and to support them with a constant sum every year. This facilitates the annual planning for our partners in Africa.
Success Stories
Rhino Rangers, Namibia
2022 - Rhino Rangers Namibia - donation of USD 15,000

2020 was a thoroughly challenging year due to persistent drought, the COVID-induced tourism collapse and the loss of 4 rhinos to poaching. 2021, on the other hand, presents a different picture.
Learn more
Rhino Rangers, Namibia
2021 - Rhino Rangers Namibia - donation of USD 15,000

2020 was like no other. While the drought in Namibia continued unabated, COVID-19 also struck, as we all know, causing a global collapse in tourism and at the same time a significant loss of funding for conservation. Nevertheless, 2020 was also the year when Namibia’s Rhino Rangers really rose to the challenge, excelled and set another record patrol year.
Learn more
Show me all entries ∨

Our partner
Jeff Muntifering - Save the Rhino Trust
Our local partner is the Save the Rhino Trust (SRT). This organisation has been working to protect rhinos in north-western Namibia for over thirty years, and it is largely thanks to their dedication that stocks have stabilised and recovered. The Save the Rhino Trust works closely with local communities, the Ministry of Environment (MET) and other non-governmental organisations (NGOs). Approximately 75% of SRT’s efforts are allocated to field patrolling and monitoring. Everything depends on this work: without accurate information about the rhino population’s performance trends, SRT cannot make decisions about regional tourism, Ecological Carrying Capacity, make recommendations to MET about the target animals to be translocated etc. Monitoring the rhinos continues to be the prime activity. Its long existence reflects an exceptional relationship of mutual trust between its partners, a highly successful commitment to the rhino, and a deep-rooted understanding of sustainable tourism in the region for the benefit of the animal world. 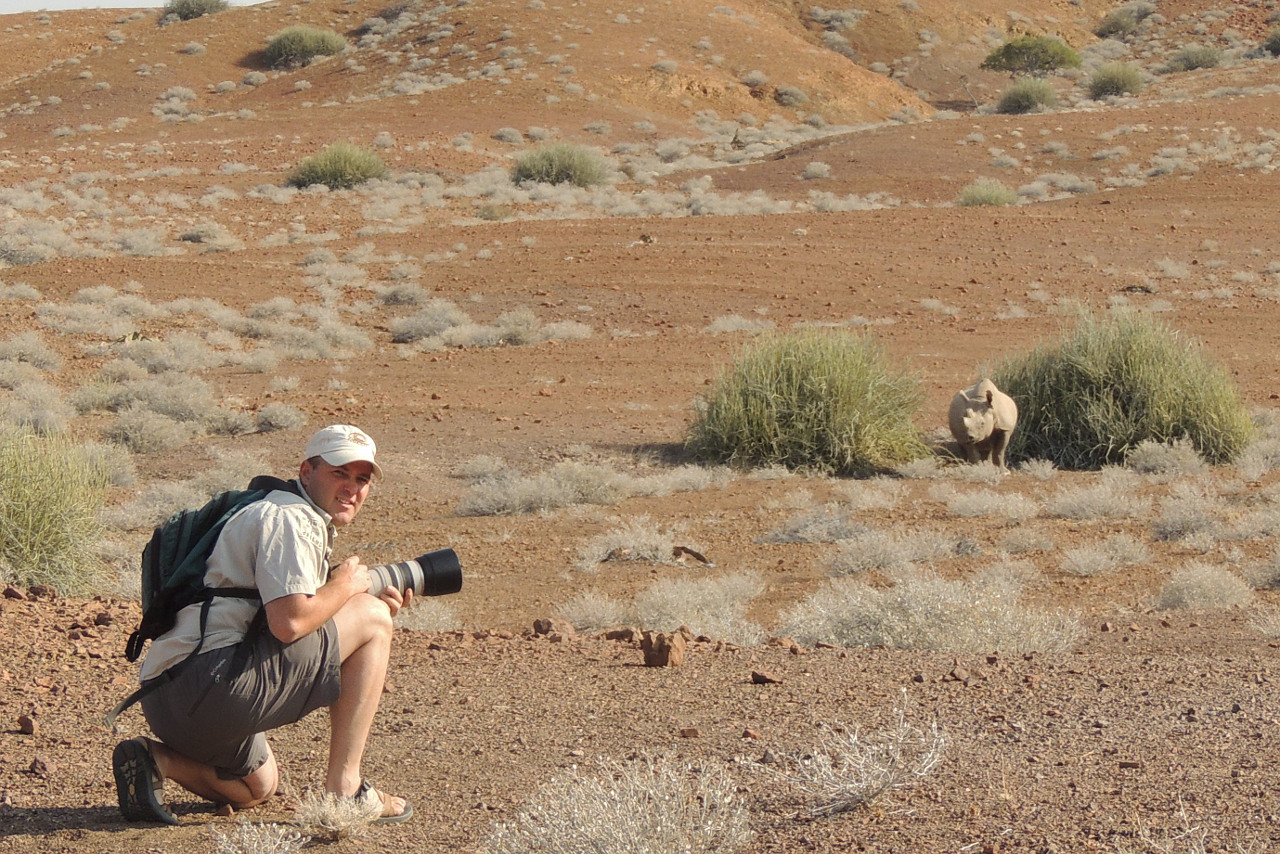 The organisation’s most important task is to monitor and observe the rhino. This scientific work offers essential insight into the rhino's way of life and forms the basis for the sustainable development of tourism and inclusion of the local community.

Born and raised in Minnesota (USA), Dr. Jeff Muntifering has spent the last 15 years of his professional career designing and delivering applied research, training and community-based programs to advance conservation practice while living and working out of remote field stations around the world. Currently, his time is primarily spent between Namibia and China where his work with local communities, government and private sector tourism takes a multi-disciplinary approach to improve conservation efforts for two critically endangered species, the Black Rhino and Przewalski’s Horse.

In Namibia, Jeff has worked with Save the Rhino Trust, a highly respected local Namibian organization, since 2003. His applied research on rhino biology, ecology, eco-tourism and incentive-based, community-led approaches to rhino conservation over the past 15 years has helped inform a variety of innovative management policies including community-based monitoring programs, eco-tourism protocols and re-introduction strategies. He also co-founded and currently coordinates the Conservancy Rhino Ranger Incentive Program, a highly successful community-based rhino conservation program that has been showcased in multiple global case studies. Jeff has also spent significant time in China since 2001 where he works closely with the State Forestry Administration and Beijing Forestry University on high profile projects including South China tiger and Przewalski’s horse recovery efforts. Here he hopes to utilize his Namibia experience to advance science-based management, community-based monitoring and eco-tourism approaches in a Chinese context.

He has also conducted field research in Alaska, Canada, Minnesota, Ecuador, Honduras and South Africa primarily targeting large carnivore conservation and restoration. He has published more than a dozen scientific articles, book chapters, and has provided numerous presentations to both academic and general audiences.