A message from the warden of Virunga NP, Emmanuel de Merode
We are extraordinarily grateful for all that you have done for us, and which you continue to do. Yes, indeed, it has been a terribly difficult year, with the attacks on our staff in April, that will remain difficult for us for a very long time. The security situation has not improved, and we suffered another attack last week, with four of our staff very seriously injured, but thankfully no fatalities among the rangers. COVID19 has also taken its toll, with a loss of tourism revenue and the need to increase our vigilance to keep the gorillas safe from the virus.

But all has not been bad. The end of the Ebola epidemic was announced ten days ago, and we've kept a zero-poaching of elephants record for almost three years now, and we're beginning to see a return of the herds to the central sector of the park. The social development programmes in clean energy and agriculture are also beginning to have a real impact in the communities, which also gives us a lot of hope for the future of the park.

I hope to see you one day soon, perhaps in Virunga.

Virunga National Park in Congo (DRC) is close to our hearts. We are aware that hardly anyone visits or knows the park, but what Emmanuel de Merode and the Virunga Rangers do every day to keep the oldest national park in Africa alive deserves our greatest respect.

As part of our Covid-19 support programme, we were able to support the park with a substantial amount of money in July 2020. The donation is used for the Virunga Emergency Fund, whose resources are needed especially in times of crisis like these to support the rangers, their families, especially the families of rangers who have been killed or wounded in the line of duty, and of course to buy food and materials urgently needed for the work in the park.

We thank all who have donated for the Virunga National Park and wish Emmanuel de Merode and his team much success and please stay well. 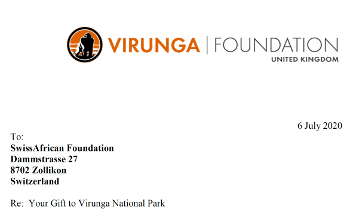 2020 was not only a difficult year for Virunga because of the COVID-19 pandemic; unfortunately, the Virunga Park Rangers also have to repeatedly deal with serious armed attacks, which often end fatally
Learn more
Our partner
Emmanuel de Merode, Marlene Zähner - Virunga National Park