Hope remains: the ‘floodplain pride’ comprised just two adult lionesses (Xpl-69 and Xpl-55) and three female juveniles from Xpl-55, the so-called 'floodplain cubs'. The mother of the cubs died in October 2016. Luckily, however, they seem to have hooked on to Xpl-69, who allows them to eat from the prey she kills. The survival of the three cubs is crucial to the survival of the desert lions themselves.

The SwissAfrican Foundation supported the Desert Lion Project in 2017 with a US$ 8,000 donation to increase the survival chances of these young animals.

A special thanks for their generous support goes to Katy and Pete Strickler from Zurich, co-founders and co-owners of the Desert Breeze Lodge in Swakopmund.

What happened in 2016
Of the five musketeers only one survived.
Sadly, the conflict between human and desert lion escalated in 2016 when the young lions continually approached villages and small settlements, killing cows and donkeys. A collaboration with the residents, which included using flashlights and fireworks, was implemented to prevent the lions from getting too close to the villages. The cattle enclosure at Tomakas was fitted with LED lights to see if colourful flashing lights would stop the lions.

After one of the musketeers died of a gunshot wound on June 12, 2016, a further three of the young lions were found poisoned on 10 Aug 2016 after they killed a donkey. Xpl-93 'Tullamore', the only one of the five brothers to survive after travelling alone at the time of the tragedy, was translocated to the Uniab Delta to take him as far away as possible from the danger zone. However, after eight days, Tullamore headed back home to the Okongwe/Tomakas region, unaware that his brothers were no longer alive. Having arrived at the Okongwe waterhole, he met the lionesses of the Okongwe pack, and there is now hope that a new family will emerge here soon.

What happened in 2017
On April 14, 2017, Tullamore satellite transmitter stopped transmitting his position data. This lion was also probably poisoned or shot.

The three female cubs that became orphaned at the age of 11 months after their mother (Xpl-55) died on the Hoanib Floodplain, have survived. They found their way through the dune-belt and settled at Oasis spring near the mouth of the Hoanib River. During Aug 2017 the three cubs discovered the Cape fur seal colony at Mowe Bay. They visited Mowe Bay station and the seal colony of three occasions and were observed feeding on several seals carcasses. Over the years the Hoanib Floodplain pride developed a culture of killing giraffes that started with the old lioness, Xpl-10 “The Queen”. The third Orphan (now just over two years of age) that joined Xpl-69 is already actively pursuing and hunting giraffes along the Hoanib River.

What happened in 2018
What looked to be an unusually dry year until late in Mar 2018 suddenly turned into a year of exceptional rainfall. Vast and extended showers resulted in large-scale flooding of the ephemeral rivers. Six of the major river systems reached the ocean: the Hoaruseb, the Hoanib, the Uniab, the Koigab, the Huab and the Ugab. Such extended rains and floods were last observed in 1995.

The orphaned lionesses, now 2.5 years old, have adapted to living along the coastal habitat at the mouth of the Hoanib River. They have become highly skilled in catching wetland birds, mainly cormorants and flamingos, and Cape fur seals. Using thermal imagery and infra-red night vision equipment their movements and hunting behaviour have been observed along the coast. The lionesses appear fixated on cormorants and flamingos – they watch the flight patterns of the birds intently, follow them and attempt to capture the birds where they land and roost.

What happened in 2019
At the beginning of the year, the orphaned lionesses continued to stay on the coast, feeding mainly on marine food like cormorants and Cape fur seals. However, as there have been more encounters and conflicts with mostly illegal fishermen and tourists, the lionesses have retreated inland and avoid the coast, especially during the day. With the help of various donations, Mowe Bay cabin was refurbished and developed into a functional research base-station.

In July an adult lioness from the central Obab/Uniab area started utilizing the coastal zone to hunt seals. During the night the lioness moved to her litter of cubs still hidden in the thick reeds near the Ocean. During the next five months she continued to raise the two cubs along the coastline in the Skeleton Coast Park. Her movements have been concentrated well inside the seasonal Torra Bay fishing area that will be occupied by several hundred fishermen end of year. Concerted efforts have been made, in collaboration with the relevant ministries, to prevent any interaction and/or conflict between the fishermen and the lions on the coast. However, this was not to happen; in December the coastal lioness disappeared with her two cubs. Her known home range and frequented areas were covered several times, without success. Most of the areas that were searched were devoid of prey animals and it is likely that the lioness has moved beyond her normal range in search of food to support her cubs.

2019 was an exceptionally dry year. Due to the low rainfall and sparse distribution of prey throughout the northern Namib, lions have struggled to find sufficient food within their home ranges during the second half of the year. ​An unusually large group of nine lions have continued to move enormous distances between the Huab and Ugab Rivers in search of prey. Led by two experienced lionesses they have, nonetheless, avoided conflict with livestock that are also using parts of their home range for emergency grazing.
Our partner
Dr. Philip Stander - Desert Lion Conservation 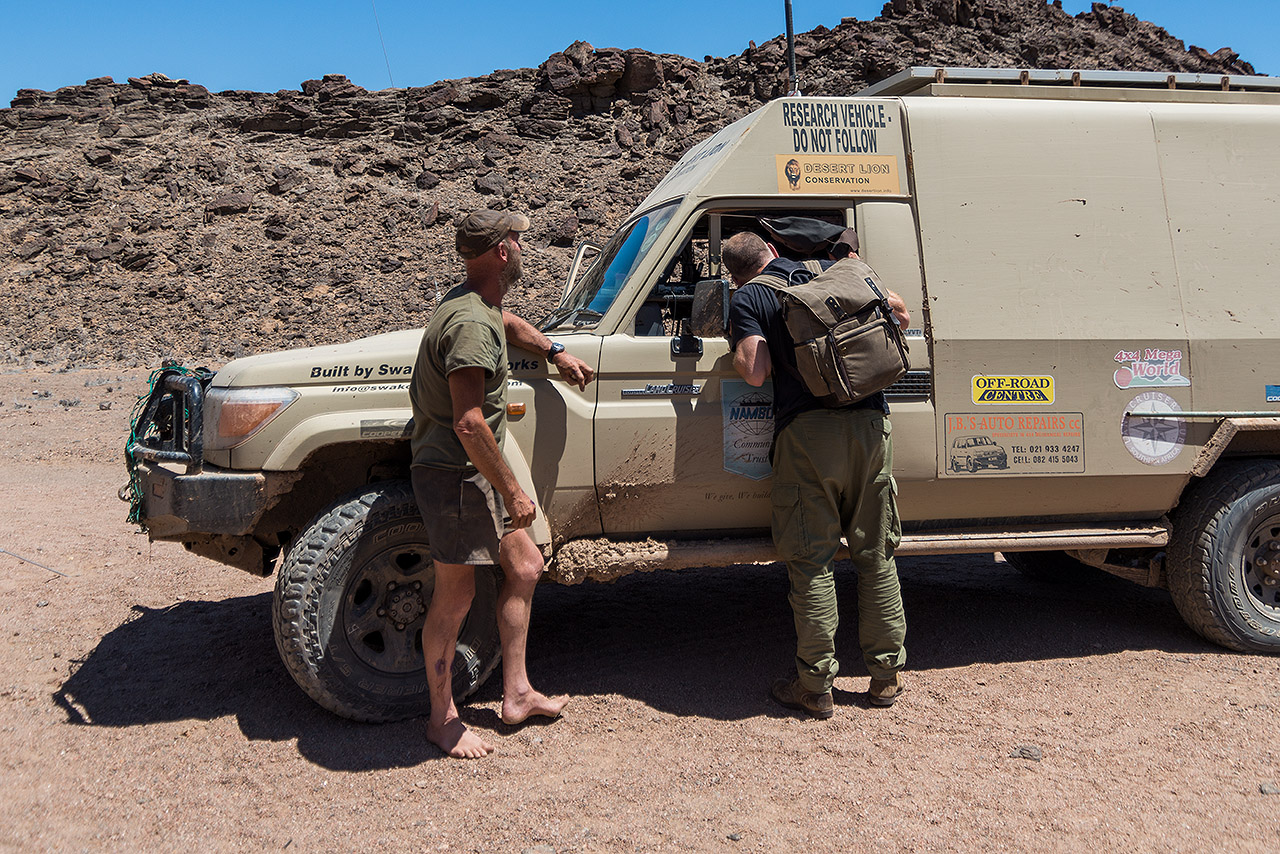 Dr. Philip „Flip“ Stander is considered the lion expert of Namibia, especially when it comes to desert-adapted lion. For more than 20 years he has dedicated his life to them, spending up to four months at a time entirely alone in the desert. He worked for Namibia’s Ministry of Environment and Tourism for 23 years studying large carnivores and obtained his PhD from the University of Cambridge in 1994. His doctoral thesis on the evolution of sociality in felids was awarded the T.H. Huxley Prize by the London Zoological Society.

It would be difficult to find a more dedicated person who has committed their life to protecting a specific species the way Dr. Flip has. In 1998, Flip started the Desert Lion Conservation Project with the objective of collecting data on the population dynamics, behavior and the movements of desert-adapted lion in the remote Kunene Region.

From the relative comfort of his Land Cruiser, Flip carries out what has come to be widely regarded as some of the finest work on lions, addressing and raising awareness of the ever so crucial human-lion conflict.